What exactly is Gii-Sens and how does an electrochemical biosensor work?

What is an electrochemical biosensor?

An electrochemical biosensor is a device that provides a quantifiable electrical signal output proportional to the concentration of a target analyte in a sample.

Gii-Sens is a blank slate, and its graphene surface can be functionalised by adding chemical functional groups, where receptor molecules are then immobilised for the detection of any biological molecule. Due to the inherent electrical properties of graphene, the high sensitivity of the system allows for amplification-free and label-free detection.

The selectivity and specificity of the detection are dictated by the interaction between receptor and target molecule. The added value of the electrochemical biosensor is the ability to provide such sensitivity that minimal receptor-target interactions can be distinctively detected and recorded, thus offering lower limits of detection than other assay types.

How does an electrochemical biosensor work?

Commonly an electrochemical biosensor has the ability to, upon a biorecognition event occurring between a receptor and target, record a physical change on the surface where the receptor is immobilised. That physical change is transduced to a signal output by an electronic reader. 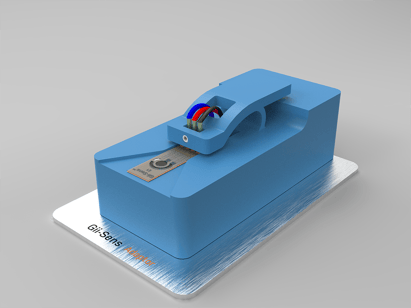 What are the different types of electrochemical biosensor?

What is an amperometric biosensor?

Amperometric biosensors are used in assays where the recognition event has an associated electron exchange between the surface and the bulk solution. Typical examples are assays where a secondary or labelled additional biomolecule is used to carry or induce a redox reaction that gets recorded. (i.e. enzyme induced redox like peroxidases, phosphatases, etc inducing a redox change to a substrate molecule). Whilst these redox changes are recorded via colourimetry or spectrophotometry methods, amperometric biosensors record the physical electron shuttling between the substrate/product molecules and the sensor surface.

What is a potentiometric biosensor?

Potentiometric biosensors are used in assays where the recognition event has an associated change in the electrical charges in the interphase between the surface and the bulk solution. These changes in the electrical charges in the vicinity of the biorecognition are common for assays that have associated pH changes or polar membrane separation phenomena. Those accumulations of certain molecules different accumulation of charges associated with them that can be monitored by measuring the voltage drop generated between surface and bulk.

What is an impedimetric biosensor?

Impedimetric biosensors are used when the recognition event has a perturbation of the electrical properties of the surface associated with it. Commonly, the recognition event has the effect of blocking the accessibility of other molecules from the bulk solution to the surface or directly deteriorates the electrical properties of such surface. This can be very accurately monitored by applying a small sinusoidal voltage at a specific frequency and the resulting current is recorded. The ratio of current to voltage provides the impedance. This technique reaches levels of sensitivity commonly associated with resonance or spectroscopic techniques.

How is Gii-Sens functionalised to recognise my analyte?

Gii-Sens has a graphene foam surface that is >98% pure carbon, making it especially amenable to a wide array of functionalisation possibilities. Just like any surface-based assay (ELISA, ELONA or lateral flow assays) the immobilisation of a capture molecule to the support surface is vital. It can be functionalised to recognise any biological molecule by employing surface chemistry techniques. These surface chemistry techniques are well documented in literature for these applications.

How does Gii-Sens compare to other surface-based bioassays?

Unlike classical surface-based bioassays, electrochemical biosensor-based assays make the supporting surface an active element of the assay. The surface is no longer simply an inert component or supporting element, it actually acts as the detecting device itself, bringing the sensing probe as close as it possibly can be to the biorecognition event. This has a tremendous beneficial effect on the quality of the detection; from any analytical point of view, sensitivity, selectivity and accuracy.

Gii-Sens incorporates the large electrochemically active area of 3D Graphene Foam into the latest digital technology and enables the miniaturisation of commonly used immunoassay formats without compromising on performance. It offers lower limits of detection with low background noise, offering a step-up in assay sensitivity and performance.

What are the overall benefits of translating a test to Gii-Sens?

Gii-Sens can offer you a test that:

Do you have any questions that haven't been answered here? Leave a comment down below or contact us today.