Rapid Advancements in Point of Care Testing of Cardiac Biomarkers 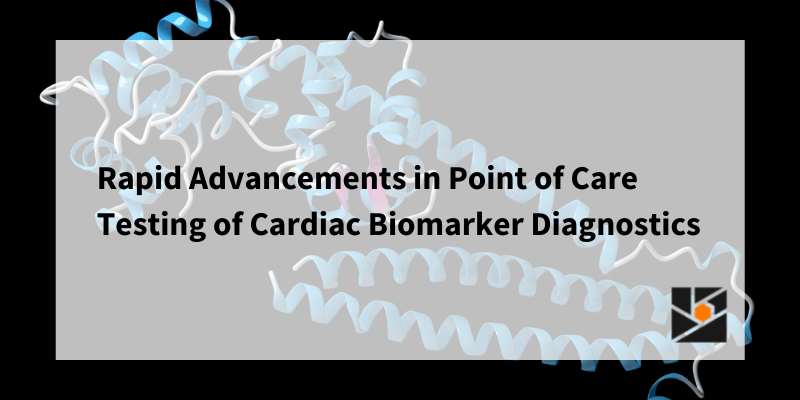 Acute Coronary Syndromes (ACS) are caused by inadequate oxygen supply to the heart and can be fatal if not treated quickly after onset. Swift and accurate diagnosis is essential for patients with ACS to be identified quickly and provided with the best care possible (1). It is thus no surprise that research is continuously carried out to develop new and improved diagnostic tools and markers that would allow ACS cases to be detected with even greater accuracy, speed, and cost-efficiency than before. There is great interest in advancing the accuracy of point-of-care tests that would allow diagnostic testing to be carried out close to the patient as opposed to a central laboratory, leading to higher speed and reduced costs. Some improvements that have occurred in the diagnostics of ACS in recent years include highly sensitive cardiac troponin (cTn) tests, discoveries of new biomarkers of interest, and electrochemical biosensors as platforms for biomarker detection.

cTn first came into clinical use as a cardiac biomarker in the 1990s as a replacement for creatine kinase (CK and CK-MB) assays and have since become the gold standard for detection of acute myocardial infarction (AMI). cTns are proteins involved in facilitating the interactions between actin and myosin filaments during cardiac muscle contraction. Three subtypes of cTn exist: cTnC, cTnI, and cTnT. Of these three subtypes, cTnI and cTnT are highly specific to cardiac myocytes, making them an excellent marker of myocardial necrosis when found circulating in the bloodstream (2). A shortcoming of early cTn assays, however, was that they were unable to detect cTn levels in healthy individuals. Pressure was put on manufacturers to develop assays with improved sensitivity, eventually leading to the creation of high-sensitivity cTn assays (hs-cTn) in the 2010s, which have now largely replaced conventional assays (see figure 1) (3). hs-cTn enables quantification of cTn in 50-95% of healthy individuals (2) and has allowed the interval for repeat testing to be decreased from six hours to three (3). However, some disadvantages with cTn assays remain. The full range of reasons for why cTn may be elevated is not clear and up to 13% of patients with elevated cTn levels are eventually evaluated to not have AMI (2).

Figure 1. History of diagnostic markers of AMI. Figure from reference 2.

Micro RNAs (miRNA) are small, non-coding RNA molecules that in recent years have been arousing interest as a novel cardiac biomarker. Although many miRNA molecules are expressed throughout the body, others exhibit varying degrees of tissue specificity, leading to some miRNAs being proposed as new markers of ACS. Examples of miRNAs suggested to be good indicators of myocardial ischaemia include MiR-499, MiR-133, MiR-1 and MiR-208 (5). Unfortunately, miRNAs have not yet proven to be more effective biomarkers than hs-cTn and do not have significant clinical use when measured independently without other cardiac biomarkers (4). Furthermore, many miRNAs proposed as ACS biomarkers are not expressed exclusively in cardiac tissue, meaning that elevated miRNA levels may not always be related to ACS (5). Although miRNAs have shown promise in cardiovascular disease diagnostics and treatment, further research is still needed before they can become a mainstay in the cardiac diagnostic toolbox.

Gii-Sens is an electrochemical sensor that is powered by our novel 3D Graphene Foam, Gii. Gii-Sens may be able to overcome the limitations currently faced by electrochemical biosensors in cardiac biomarker diagnostics by utilising the properties of a very large electrochemically active area and a >98% pure carbon surface. These properties enable lower limits of detection, high sensitivity, and specificity. Additionally, Gii-Sens is stable under relatively mild conditions and the performance is not affected by external environmental factors and can be easily integrated into a point-of-care (POC) diagnostics test.

Recent advances in ACS diagnosis include the development of the hs-cTn assay, which increases sensitivity and decreases the time between repeat measurements, as well as the investigation of miRNAs as a potential biomarker and therapeutic measure for cardiovascular diseases. Furthermore, electrochemical biosensors utilising electrical current for biomarker detection as a point-of-care diagnostic tool has made diagnosis faster, cheaper, and more convenient to carry out and have great potential for further development and applications.

Are you developing a POC device for cardiac biomarkers and want to explore the benefits of Gii to take your product to the next level?

Karolina has a background in Pharmacology