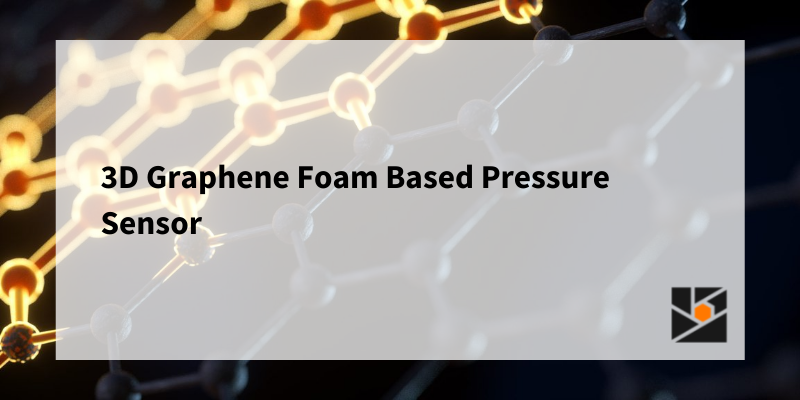 Pressure sensors have many applications and are widely used devices; especially in the automotive, medical, and industrial sectors. A pressure sensor is a device that measures the pressure of volatile gasses or liquids: pressure is the ratio of a force to the area force is applied to. Pressure sensors operate signal transductions to generate signals under specific pressures: gravity and most physical contact can generate pressure. They can be used to control and monitor thousands of everyday applications and can be indirectly used to measure fluid/gas flows, speed, water level and more (1).

In humans, our physiological activities generate pressure; for example, blood pressure is generated from the force given by the heart to push blood into our system; pressure in the blood vessels fluctuate frequently with the contraction and relaxation of blood vessels for circulation. In robots or artificial limbs, pressure sensors could be used to mimic the features of mechano-receptors distributed within the human skin, providing haptics to those inorganic objects.

Artificial Intelligence (AI) could use pressure sensors readout to train robots faster. Thanks to the great progress on communication matter through the innovative 5G technology, it makes the Internet of Things (IoT) to be a great ally for the remote control of robots and artificial systems. The use of these pressure sensors on surgical tools (so-called artificial skin or electronic skin (e-skin)), will enhance the precision of surgery carried out remotely. To that end, pressure sensors are required to be flexible, stretchable, wearable and light weight.

Flexible pressure sensors are low-cost and have flexible advantages due to being organic-based: this makes them a highly anticipated field with great potential in health care and monitoring devices (2), e-skin (3) and other applications. The ability to make flexible pressure sensor arrays into small devices has had great impact on development of many potential applications including wearable technology (4). One of the most promising strategies proposed so far, is for low dimensional structures, such as semiconductor nanowires and 3D carbon structures, to reduce the weight of the overall device (and manufacturing cost), while enhancing the performance of the sensors thanks to the high surface area of the active layer.

There are three methods of current flexible pressure sensors: each with their benefits and drawbacks.

Piezo-capacitive: measures the ability to store an electrical charge

Piezo-resistive: detects changes in resistance of a material subjected to mechanical stress

Figure 1. Basic pressure sensor concept of (a) piezo-capacitive, (b) piezo-electric and (c) piezo-resistive (5,6,7)

Although pressure sensors are abundant in their application and potential, the cost of materials used in these devices can be expensive e.g., gold film. Research and development to use and optimise pressure sensors have been widely studied. To compete with the current industrial piezoelectric pressure sensors, the following qualities need to be met: easy fabrication, reproducibility, high sensitivity, and compatibility with temperature sensitive substrates.

Our CSO, Dr. Marco Caffio worked with Mr. Connor Ian Douglas, Dr. Carlos Garcia Nuñez, and Prof. Des Gibson from the Institute of Thin Films, Sensors and Imaging at the University of West of Scotland, to develop a pressure sensor that is flexible and highly sensitive by incorporating Integrated Graphene’s pure 3D Graphene Foam (3DG).

The goal of this collaboration was to develop, characterise and optimise the properties of an integrated 3DG fabricated pressure sensors. Two configurations of pressure sensors were developed: vertical (Figure 3(a)) and co-planar (Figure 3(b)) structures.

In the vertical structure, metallic electrodes are defined on top of 3DG and at the bottom of 3DG, resulting in an asymmetric structure (Figure 3(a)). In contrast, co-planar sensors consist in a symmetric structure. Additionally, co-planar sensors were also embedded into Polydimethylsiloxane (PDMS) and used as an active layer of resistive pressure sensor to test the durability and augmented sensitivity expected by PDMS protecting layer (Figure 3(c)). The dual role of the PDMS layer was studied here, including as protective layer and pressure sensitivity layer.

Figure 3. 3D schematic diagrams of the 3DG pressure sensors with (a) vertical and (b) co-planar configurations. (c) The use of a PDMS protective layer was also investigated as a potential way to increase the sensitivity of the sensors.

Initial testing of both structures was taken (Figure 4(a)). The sensitivity of the sensors was evaluated with a simple electric circuit comprising the measurement of a voltage dropped in a load resistor (with an electric impedance similar to that exhibited by the sensors).

In this work, a home-made system was designed to carry out high precision pressure measurements during the acquisition of the pressure response. A linear motor was used to apply a mechanical stress on a well-defined area of the sensors. The out voltage generated by those sensors under each pressure conditions was converted into a current vs pressure graph. Finally, using the well-known Ohms law, the change in resistance of the sensors was plotted vs the applied pressure. The values of the resistance were compared to the initial resistance (prior to the application of any mechanical stress) and represented as a percentage of variation (Figure 4(a)).

The sensitivity of both configurations shows a different range of values within the window of pressure under evaluation (1-40 kPa). However, both sensors, as observed in Figure 4(a), show similar sensitivity, confirming the validity of both structures to detect mechanical stress in this range of pressures. Further experiments will be needed to evaluate the applicability of these devices to a higher-pressure range.

Figure 4. Comparison of piezo-resistive response from 3DG sensors with different (a) structures and (b) coatings. (a) 3DG sensors based on vertical (red) and co-planar (black) structure, exhibiting similar sensitivities along the window of investigation (1-40 kPa). (b) 3DG sensors without (green) and with PDMS (blue) coating the surface of the active layer; red arrows indicate the increase of the sensor’s readout differences at higher frequencies range.

Co-planar sensors were also tested with and without PDMS protective layers (Figure 4(b)). The results from the experiments showed that when covered with PDMS, the voltage produced decreased while pressure increased; whereas with no PDMS the first test showed a decrease in voltage primarily, but then increased as pressure applied increased. These results suggest an opposite behaviour caused by the PDMS layer.

First hypothesis indicates that PDMS embedded in the 3DG structure could cause an opposite change in the resistance of the graphene upon mechanical stress. That is, 3DG sensors under mechanical stress (green curve in Figure 4(b)) show a decrease of the resistance of graphene which is suggested to be related to a reduction of the porous size within its structure, and thus, a reduction of the voids density. In contrast, the PDMS filling the voids of 3DG structure could produce an increase of the porous size upon mechanical stress, which is further increasing the resistance of the material, as observed in Figure 4(b). This interesting result not only helped to understand the working principle of pressure sensors based on 3D nanostructures, such as 3DG, but also offer potential ways to increase the sensitivity of the pressure sensors by integrating both structures in one; enhancing the sensors response as pointed out by red arrows in Figure 4(b).

To test the durability of the co-planar sensors, cyclic pressure testing of co-planar sensors was conducted with and without PDMS. The cyclic test consisted in the application of above 3,5k mechanical stress cycles to the sensing area of the device. The setup used to characterise the devices guarantee the same pressure was applied to the sensors in each cycle. For that, a load cell working in close loop configuration with the actuator (linear motor exerting the mechanical stress on the sensors) was used to ensure the constant pressure was applied on the devices for thousands of cycles.

Devices without PDMS exhibited a constant response, with a slight increase of the resistance change during the last cycles of the experiment (Figure 5(a)). This indicates a high robustness of the 3DG without the need for any protective layer preventing plastic deformation of graphene structure or transfer of material to the stamp used to apply mechanical stress. In contrast, the devices coated with PDMS presented a warm-up time where the sensors change constantly the output resistance. After that period of time the response of the sensor was very stable and constant as observed in Figure 5(b).

This testing showed that the use of a PDMS coating provided protection and increased the durability of the sensors; PDMS also kept the voltage produced steady with no drop after a large numbers of presses. They were also able to show that the fabricated sensors were had a sensitivity of 0.0418 mV/kPa over a range from 1-50 kPa. 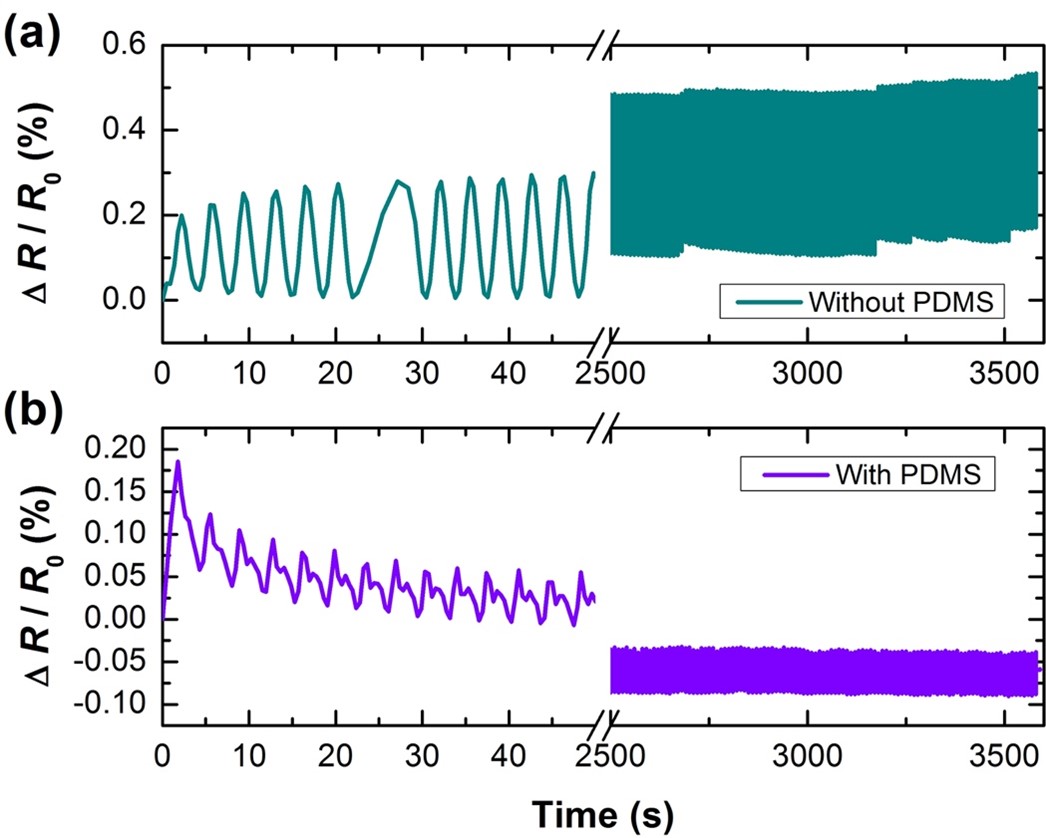 Figure 5. Response of pressure sensors (a) without and (b) with PDMS protective layer.

These sensors are still in the initial fabrication process; more data needs to be collected and analysed to fully understand the implications these sensors can provide for a variety of industries. However, as the results from this experiment showed some positive conclusions, it provides great hope and potential for the integration of graphene in the next generation of sensors in all fields.

If you have an assay design or idea that you would like to enhance, contact us today

Dr. Carlos Garcia Nuñez is a Lecturer in Physics at the University of the West of Scotland, and researcher of the Institute of Thin Films, Sensors and Imaging